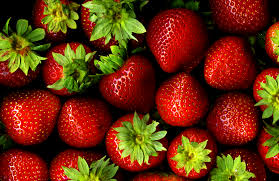 MAY MARKS THE START OF THE BRITISH STRAWBERRY SEASON
May 1st sees the official start to the British berry season with milder temperatures, longer days and more sunshine (Fingers crossed) – the perfect conditions for enjoying British berries.

The season kicks off with British strawberries which will hit the supermarket shelves from early May. Due to advancements in varieties, an extended season, and improved varieties developed in the last few years by growers, consumers can expect to see a wide selection of British berries, all of which have been developed to suit the UK climate.

Elsanta is still the most popular British strawberry and a favorite of mine; it has a long season and an excellent taste. Other varieties include English Rose, known for its orange zest flavour and Jubilee, a good all rounder.

Although strawberries will be in plentiful supply throughout May the British season will reach its peak in June and July. If good weather continues from July you can expect to see British strawberries until the end of September.

You can enjoy strawberries straight from the punnet at a picnic, or just simply with cream or ice cream. Strawberries – a great accompaniment to summer!

Ouch! There was a server error.
Retry »